The Difference between Single and Double Mechanical Seals 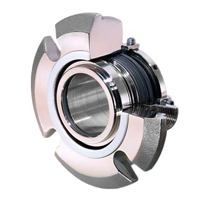 Mechanical seals are devices that seal machines between rotating parts (shafts) and stationary parts (pump housing) and are an integral part to the pump. Their main job is to prevent the pumped product from leaking into the environment and are manufactured as single or double seals. What's the difference between the two?

WHAT IS A SINGLE MECHANICAL SEAL?

Read more about reasons why mechanical seals self-destruct on our blog.

Mechanical seals tend to leak a vapor from the high pressure side to the low pressure side. This fluid lubricates the seal faces and absorbs the heat generated from the associated friction, which crosses the seal faces as a liquid and vaporizes into the atmosphere. So, it's common practice to use a single mechanical seal if the pumped product poses little to no risk to the environment.

WHAT IS A DOUBLE MECHANICAL SEAL?

A double mechanical seal consists of two seals arranged in a series. The inboard, or “primary seal” keeps the product contained within the pump housing. The outboard, or “secondary seal” prevents the flush liquid from leaking into the atmosphere.

Double mechanical seals are commonly used in the following circumstances:

These Stories on Mechanical Seals