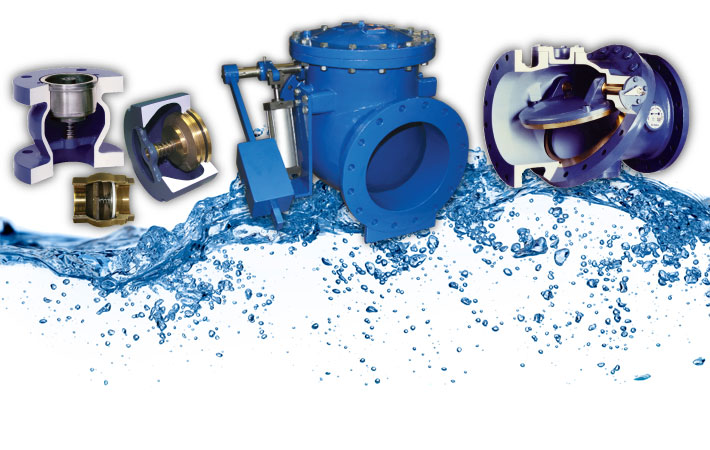 What Is Water Hammer?

Water hammer is a phenomenon that occurs in many pumping systems, sometimes having minimal effect, and other times catastrophic. If not carefully planned for, water hammer can cause thousands of dollars in damage and lost productivity. So what is water hammer anyway?

According to a Pumps and Systems article, published in August 2008, “water hammer is a pressure surge that can arise in any pumping system that undergoes an abrupt change in its rate of flow and usually results from pump starts and stops, the opening and closing of valves, or water column separation and closure.”

When these abrupt changes are inflicted on a system, they cause the fluid to undergo a change in momentum. Let’s look at an example. Let’s say a valve is closed quickly to isolate flow of water. The flow of the water has been interrupted and has nowhere else to go, and collides against the closed valve. Because water is not very compressible, it creates a pressure, or shock wave, then reverses flow, back upstream. Should the wave then run into a pump upstream, the fluid will continue to travel back and forth until friction losses cause the wave to settle. 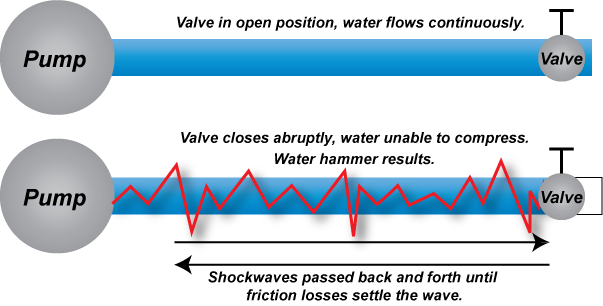 Throughout this process, the shockwaves have sent vibrations through the system. The size of the shockwaves is dependent upon 3 factors: the velocity of the fluid in ft/sec (V), the length of the pipe between barriers in feet (L), and the amount of time it took to close the valve in seconds (t). The intensity of the shockwave can be calculated by this equation, (offered in article from Blacoh U): P=0.07(VL/t), where P is the resulting additional pressure generated by the shock wave. (Additional water hammer calculators can be found in a previous post, "3 Calculators For Water Hammer And Pressure Drop".)

Let’s take our example and plug it into the equation. The fluid is moving at 5 feet per second, and the length of pipe between our two valves is 500 feet. Our actuator has quickly closed the valve at .5 seconds. The resulting pressure from the shock wave is as follows:

Most systems are not designed to handle such great additional pressures as those generated by water hammer. For a more indepth study of water hammer, head out to Blacoh U and create an account for access to a 30 minute video "The Phenomenon Called Water Hammer".

When you abruptly close valves, listen for loud noises or vibration and pulsation of pipes. If you hear or see what looks like the effects of water hammer, be sure to consult an experienced engineer. They can help you put some fixes in place to keep your system intact.

Got a problem with water hammer? Ask us about it! We gladly provide technical assistance to businesses in Wisconsin and Upper Michigan.