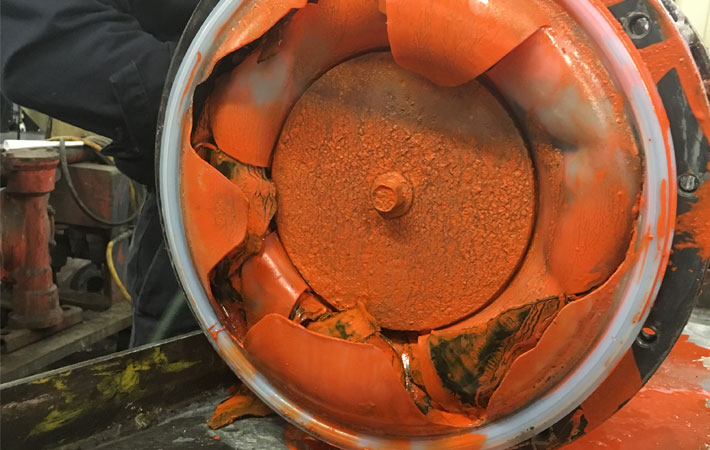 Recently, a Crane sales engineer and I toured a manufacturing facility in southern Wisconsin. As we walked through their shop filled with air operated diaphragm pumps waiting for repair, I noticed they were covered in product. Failure after failure caused unplanned downtime, and to add insult to injury, a huge mess to clean up.

Why Ruptured AODD Diaphragms Are a Big Problem

Spills from AODD pumps concern manufacturers, from both environmental and profit perspectives. A spill isn’t easy to clean up. Oftentimes, workers will throw a substance like oil-dry or kitty litter on the spill to absorb the liquid. Then someone has dispose of the liquid by shoveling it into a waste container.

It gets trickier when the fluid spilled is hazardous waste. The manufacturer then must pay to have the waste trucked off and treated before disposal. It’s extra cost to what has already cost the manufacturer in lost time and lost product.

Spillage of some fluids means additional disposal fees or even fines. Fluids such as:

Some fluids are extremely expensive. Losing them is very costly to the manufacturer:

Running the pump dry is a common way that diaphragms will fail. It sounds pretty obvious, but very common.

Another way diaphragms rupture is by operating the pump higher than maximum pressure ratings. Sometimes operators crank up the air pressure to get the pump to work faster. Doing this leads to leakage, bent inner plates and shaft, and of course, bulging and ripped diaphragms.

When the diaphragm tears, fluid fills the air chamber, then it sprays out the muffler. Worse yet, if there's chemical compatibility issues, the air end of the pump is destroyed.

How To Prevent Ruptured AODD Diaphragms

Understanding that AODD pump spills are costly and preventable, I asked Crane’s sales engineer to give me some insight on what actions end users could take to prevent diaphragm failures. He had 4 tips to share. Regulators are the #1 solution added to diaphragm pumps, but they rarely are. A regulator is to an AODD pump what a VFD is to motorized pumps. Regulators control the amount of airflow into the pump, regulating the stroke speed and extending the life of the diaphragm. Overpressurizing the diaphragm causes it to bubble out and fail faster than operation under normal conditions.

Air compressors are very expensive to purchase and operate over time. No one wants to add more compressors. The addition of small regulators for air operated diaphragm pumps could mean big savings on energy costs as well as the purchase price of a new compressor.

Use A One Piece Diaphragm

A one-piece diaphragm is a diaphragm that can stand up to more pressure than a standard diaphragm. It has dimples that allow the diaphragm to roll with excessive pressure and provide longer service.

As with any pump, a standard AODD pump does not suit all applications. Understand the fluid properties, the process, and the limitations of the pump doing the work.

For example, pumping thick fluid with a standard duty pump can lead to failure. Thick fluids tend to build up on diaphragms and will eventually cause failure. In this situation, consider heavy duty ball valve pumps or flap valve pumps.

Containment duty pumps have an extra chamber filled with fluid between the “wet side” and the “air side” of the pump. When the diaphragm fails, fluid enters the containment chamber and the indicator on the outside of the pump changes color, alerting the user of the failure. The system continues to operate until maintenance is scheduled, and the best part – the fluid does not leak out, eliminating a major clean up.

Containment duty pumps cost more than standard or heavy duty air operated diaphragm pumps, but may be worth it depending on product and cleaning cost.

An ounce of prevention is worth a pound of cure, and in the case of AODD pump spills, this old adage couldn’t be more true. Proper pump selection, the use of regulators, and training operators to prevent overpressurizing can go a long way to preventing a diaphragm failure of epic (and very costly) proportions.

Having chronic AODD diaphragm issues? Ask us about it! We gladly provide technical assistance to businesses and municipalities in Wisconsin, Minnesota, and upper Michigan.