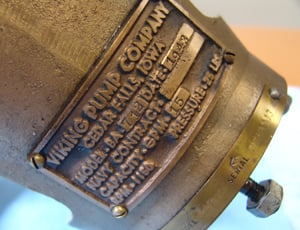 I was working at my desk one day, when Sales Manager Kurt Schwei burst into my office. The expression on his face was one of not just pure joy, but… elation. With a thud, he placed the chunk of brass he was carrying on my desk and said, “Now this, is what I get excited about.”

“This is a brass, lube oil, Viking Pump from the USS Cobia over at the Wisconsin Maritime Museum.”

I looked closely at the tag on the pump, sure enough. It was stamped “Viking Pump Company” and had the date “1943”.

The USS Cobia was built by the Electric Boat Company of Connecticut, and launched in November of 1943. In June of 1944, she was sent on her first of 6 war patrols. The USS Cobia was instrumental in the battles of the Pacific, sinking 13 Japanese vessels, and forever making a name for herself in WWII submarine history for attacking an enemy convoy bound for Japanese-held Iwo Jima.

The USS Cobia was considered obsolete by 1959, and after spending some time as a training vessel in Milwaukee, was transferred to its current home in Manitowoc outside the Wisconsin Maritime Museum. The museum has been working to restore the vessel since 1997. The Viking lube oil pump aboard was part of the project.

The pump was taken back to our Viking Pump Factory Authorized Service Center for repair. Vern Frahm, a 39 year veteran of Crane’s service team was tasked with taking a look.

As Vern began to take the pump apart, piece by piece, he was surprised to find that though the tolerances on the pump were on the upper end from years of operation, this 71 year old pump was in remarkably good shape.

There were some parts and pieces that were worn: the mechanical seal faces needed to be relapped, along with the poppet and corresponding seat in the relief valve. Some parts were needed from the factory as well, the RV gasket, RV bonnet gasket, bearing lock washer, head gasket, and bearing shim set. However, Viking has not supported this pump, or even produced a brass pump in many years. Vern had to rely on the tools at his disposal in Crane’s service shop, as well as his many years of experience to repair the pump.

Vern enlisted the help of another service technician, Paul Melanson to machine some parts, while he built other parts himself. Viking Pump sent parts they felt could possibly work with the pump.

At last, Vern had the pump back together, cleaned, and delivered back to the museum for installation. Though the submarine no longer goes out for dives, the museum will still fire up the engines for special events and ceremonies, the next one being the USS Lagarto Rememberence Ceremony, May 2, 2015.

It was a tremendous honor to work on such a historic artifact that has been halfway around the world and back, and after over 70 years, will continue to operate for years to come.