Valves: Flow to Open (FTO) vs. Flow to Close (FTC)

One of the characteristics of a linear globe and rotary control valve is flow direction on the plug; flow to open (FTO) and flow to close (FTC). In this post, you'll gain a better understanding of these concepts and which is best for your application. Differences between flow to open and flow to close are explained through two simple analogies.

Also referred to as standard or forward flow, or in globe valves, flow under the seat. Think about when you've controlled the flow of water from a garden hose with your thumb. Your thumb acts like the face of the plug in a globe valve - flow is pushing against your thumb to open a flow path for the water.

Also referred to as reverse flow or in globe valves, flow over the seat. Consider a drain plug in a bathtub. The flow direction is against the back or top of the plug (rather than the face) creating a tendency of the plug to close into the drain. 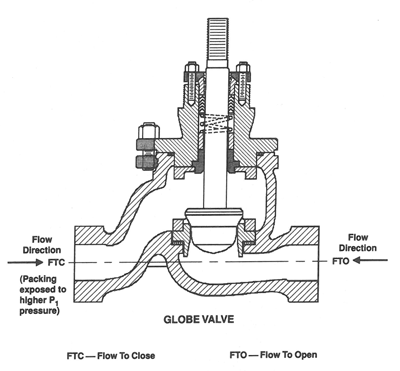 Many variables determine which flow direction is appropriate for an application. The style of valve trim, valve (rotary or linear), and the design of the valve all determine flow direction.

Most general service applications are flow to open unless there's a reason to go to flow to close. In rotary valves without a retained seat design, having the flow direction towards the face of the plug assists the seat in sealing against the plug, resulting in tighter shutoff. In globe valves anti-cavitation and low noise trim could be either under or over the seat. Flow to open is generally best for control in low flow applications.

When anti-cavitation trim is required in a rotary valve, flow to close is used so the flow can be diffused rather than flowing into the face of the plug. Balanced trim in a general service globe valve is typically flow to closed. This is normally used in high pressure and/or throttling applications to stabilize the stem. A potential disadvantage of flow to close is reduced flow capacity.

Below is an exception to a classic style flow to open globe valve. The flow direction is NOT against the face of the plug, but behind the plug. This is not flow to close since the plug is located beneath the seat ring. Flow direction is still considered ‘under the seat’ which is causing the plug to open. 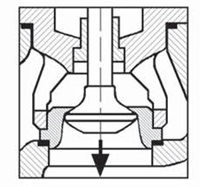 What's often confused is that flow to open and flow to close are independent of fail open (air to close) and fail close (air to open) on an air-to-spring diaphragm actuator. The actuator set up will determine whether the spring set will open or close the valve upon removal of air supply. This discussion merely involves flow direction through the valve in relation to the valve plug.