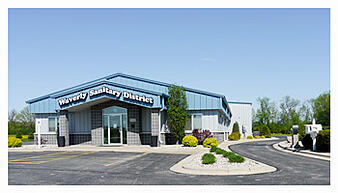 It was described as a “bog”. A thick mass of rags congealed with grease covered the top and floor of a wet well in Waverly Sanitary District, Menasha, Wisconsin. Multiple attempts were made to rid the rags from the wet well, but they always returned.

Rags are a common problem in wastewater treatment across the country. Adding grease gives the problem an added element of difficulty for wastewater operators.

In the Waverly Sanitary District, the bog occurred in only one lift station. Bob Krueger, Director of Public Works, attributes this partially to the self-priming pump in use; the other three lift stations he oversees have submersible pumps. (Note: this may not be the cause in every situation, submersible pumps can also have the same problem.)

So there the bog sat. A coagulated mass of wipes and grease that refused to be pumped away.

Waverly Sanitary tried multiple solutions to clear the wet well. They tried a fire hose to break it up, but the large chunks of wipes clogged the pump. They hired a septic hauler to suck out the well, a very effective means, but cost them $500 each time. Lastly, they tried citric degreaser to break up the grease molecules. They found that this too was expensive ($800 for a 55 gallon drum), and not as effective as they had hoped.

Tired of putting up with the additional maintenance, paying for septic haulers and citric degreaser, Krueger decided it was time to find a permanent, more cost effective solution. He called his Account Manager at Crane Engineering.

The Account Manager visited lift station #4 and suggested an ABS submersible mixer on a dual timer to keep the wipes and grease from congealing. It would mix for just enough time to homogenize the fluid, allowing the wastewater and rags to easily pass through the pump and check valves, and then shut itself off. Krueger agreed to try it.

Four years later, Waverly Sanitary has not yet had to clean out lift station #4. The submersible mixer paid for itself by year two.

If you’ve got a “bog” like Waverly Sanitary had, Krueger advises not to try citric degreasers. He says in his case, they were very ineffective, and expensive. Not only this, but if a heavy rainfall comes after treatment, the degreaser becomes diluted, pumped out, and the $800 spent on the chemical is wasted. Instead, seek help from an engineer, experienced in many different ragging situations. Odds are, they’ve seen circumstances like yours before, and can suggest a solution that will alleviate your ragging problems.

Previous Story
← Sick Of Ragging? How One WWTP Put The Kibash On A Rag Plagued Pump
Next Story
Quiz: Think You Know Centrifugal Pumps? →